Animals are More intelligent Than we Think. Watch a Dolphin Requesting Help From Divers And Getting it

Humans believe to be the most intelligent species on this planet and tend to think that, what they call non-rational animals, are dumb creatures that don’t get it.
Of course you don’t see animals building up huge structures as humans do, but on some levels, animals may well be more evolved than humans are.

Humans are really talking about themselves when affirming they’re the most intelligent beings on Earth, and they’re measuring it up with their own made scales and intelligence paradigms. Maybe one day, when dogs, dolphins, chimpanzees and other animals will be better understood and their minds and intelligence be better known, will humans realize they may not be that much highly intelligent, especially on the spiritual paradigm.

Did you know dolphins do not attack humans even when being attacked? They have teeth, sharp enough to hurt humans, yet they never do. Even in Japan, when hundreds of dolphins are trapped and slaughtered by local fisherman. The fisherman is right there with them in the water in a horrific killing spree, and yet they still don’t hurt humans. If you want to check that out and be disgusted check those videos on YouTube. I will not post them here as they are not a pleasant thing to watch at all.

Some may say they are not so smart because they don’t fight back, and yes, that is a possibly sound theory, just as mine. But why are then dolphins considered so smart if they seem to be so dumb? Also, since they’re living in the wild where everybody is eating each other out, it would be reasonable to think they have survived the harsh ocean world exactly for having that fighting spirit, otherwise they’d would be extinct for dumbly being eaten by bigger and smarter fish.

If you trap several sharks and jump in the water to try and kill them, I don’t think sharks will be mere witnesses and will surely bite your ass down.

This should be a humbling experience for humans, maybe showing some sort of spiritual evolution that humans may be lacking, while committing such atrocities. Every life on Earth is precious and should be treated as such. 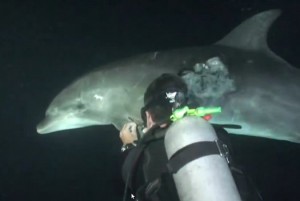 Dolphin Being Rescued by Divers in Hawaii

Well anyway, it seems that fate in humanity is being restored by the day.

There are numerous stories of dolphins saving humans, dogs and other creatures when in danger at sea, but this time this story has gone the other way around.
A group of divers in Kona, Hawaii filmed the saving of a dolphin that was requesting them help. Yes, you read it right. The dolphin requested for their help and it’s all on tape. This video shows how smart animals can really be and we wonder where mankind’s responsibility lies regarding all the Earth’s life forms. 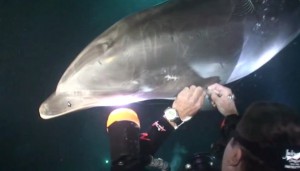 Dolphin Being Rescued by Divers in Hawaii

At the camera was Martina S. Wing of the Ocean Wings Hawaii, Inc and her words inspire us all.

“I was at the right time at the right place. I am honored to share this footage with all of you. Let’s make better decisions for the ocean and the creatures that inhabit it. I strive to make a difference, and you can make one, too.” 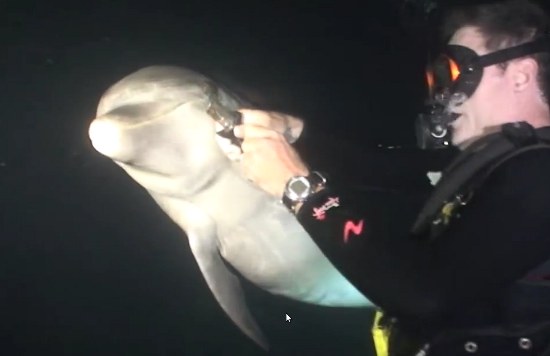