Former Canadian defense minister Paul Hellyer is now considered the highest-ranked alien believer on Earth. Hellyer is a Canadian engineer, former member of Congress, writer and commentator with a long and varied career.

Even though it seems no factual evidence exist for the existence of alien life on Earth, scientists suggest the vast amount of already known stars and galaxies in the universe makes it extremely likely that alien life does exist.

“UFOs, are as real as airplanes flying overhead”
Paul Hellyer

Scientists have been finding life forms, called extremophiles, who live in the most extreme cool, hot or acid environments here on Earth. Many speculate this fact alone reinforces the idea that when life can get found in such extreme locations on Earth, it can exist in extreme alien environments too.

Also, it’s my opinion that humans need to be too self-centered to think the Earth to be the only planet in the vast universe to harbor life. To think life is exclusive to planet Earth seems so wrong as when humankind once thought the Earth was flat or the sun was revolving around it.

The Honorable Paul Hellyer goes even further by saying not only do extraterrestrials exist, but some are living on Earth and working together with the U.S. Government.

Paul Hellyer testified, saying that exactly at the Citizen’s Hearing, which got held from 29 April to May 3rd, 2013 in Washington DC. The Citizen Hearing is a non-governmental hearing chaired by six former U.S. Congressmen. According to the event’s website, these hearings are doing “what the U.S. Congress had failed to do for forty-five years”. 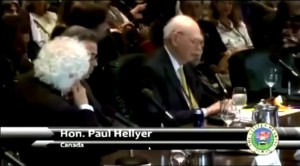 “All other freedoms won by the millions of men and women who fought and died in world war II are being flushed in, unceremoniously down the drain. The only hope for peace is a negotiated settlement. This will require a paradigm shift in American attitudes involving a de facto renunciation of the plan for a new American energy and the adoption of a pledge in cooperation with all humankind to build the kind of world which we are collectively capable of.
Young people everywhere needs to get challenged by a noble cause, the need to be involved in arresting global warming. Creating a banking system that is just and sustainable and lead the way in the transformation of the new reality that we have to live in harmony with our celestial neighbors as well as seeking peace on earth.
In a word, we have to become spiritual beings in practice the one tenet that the world’s major religions have in common, that is the golden rule“

Excerpt from Paul Hellyer speak at the Citizen Hearing on Disclosure