We shouldn’t mix concepts when talking about the old school Freud’s concept of conscious and subconscious mind.

Finding the root of the word subconscious, “sub” is a prefix derived from Latin meaning: “under”, “below”, “less than” or “beneath”. So the word subconscious makes sense since our present brain evolved from our reptilian ancestors, hence its name, the reptilian brain. That’s the part responsible for our subconscious mind tasks like breathing or keeping our organs and other systems working.

Following the root of the word supra-conscious, supra, is a Latin prefix added to the start of a word indicating “above” or “beyond.” 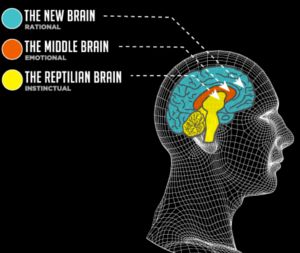 The 3 evolutionary stages of the brain – Reptilian, Limbic and Neocortex

You may be wondering what’s the confusion regarding these definitions. The fact is that talking about conscious and subconscious mind could have made sense in Freud’s time, according to the perceptions of the matter back then.

Today, however, and taking into notice quantum scientific discoveries, the Newtonian view of the way the mind works might be an overly simplistic and outdated paradigm. Maybe we shouldn’t talk about the subconscious mind when referring to the whole unconscious process because it might be actually 2 parts, the “sub-conscious” and the “supra-conscious” mind.

One of the latest books on the subject is “The Supraconscience of Humanity” by Eduard Hugo Strauch. It’s a very interesting book and Eduard’s thoughts are very enlightening.