So many things got said, and different scenarios have been brought about regarding 2012, that the question many people are still asking is what will happen?

According to the Mayan culture, the end of their calendar is on December 21st, 2012, but they never said the world would end on that date, it’s just the end of the biggest cycle of their calendar is over. This great cycle end is also interestingly coincidental with a rare event known as a galactic alignment between our sun and the galactic equator plane. This unique event, which only happens every 26000 years is also interesting due to the vast amount of information the Mayans must have had, astronomy wise, which would even to be all that easy to grasp with today’s current technology.

To the ones sensing a mass consciousness shift coming in, or even a doomsday scenario, the clues and suggestions seem to add up to the fact that 2012 may indeed have something important coming our way. The evidence for the feeling of change is coming from the revolutionary movements all over the world (Europe, North Africa, and the Middle East. Also in the scientific community many fringe scientific theories, quantum physics theories, Multi-verse theories, and global consciousness, have been playing a critical role in the processes of change. 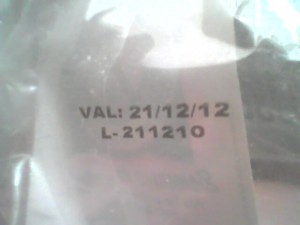 Change is everywhere and it seems to be getting more frequent. That’s where the validation dates subject of this article comes into place. We seem attracted to the specific date that you can see on the image.
The date 21st January 2012 got filled with meanings that our subconscious minds appear to take notice and draw us to check them it with our conscious mind. Have you seen this date lately?
According to the European date format, the time on the image is exactly 21st December 2012, how cool is that? And it doesn’t stop here, look at the number code right bellow it, It’s just one’s and two’s. Are the Angels telling us something? Are our minds tricking us? No matter what it is, numerology seems to be getting a recurring fact on people’s minds, and stuff like the repeating numbers phenomena are gaining new followers every day. Is there a rational or spiritual reason for all this? Only time and future events will tell.

Well, at least, if the December 21st, 2012 date, is, in fact, a doomsday date, at least the bag of almonds on the picture wouldn’t have passed its validation date. Look at the bright side, right?

Share any cool or fun stories regarding this issue, or others, and I bet we can all laugh a bit over this.