The First Alien Contact And UFO Sighting Of The 20th Century

Much of the information regarding what happened is available for the ones willing to dig it up. Some of the authors that documented the event even seem to suggest that the Vatican was involved in a massive cover-up to prevent the real information from being revealed to the public.

What happened can be resumed as a series of anomalies that started to take place on May 13, 1917. The facts refer to tree children, Lucia, Francisco and Jacinta with ten, nine and seven years old respectively, that while watching sheep, saw a flash of lightning followed by the appearance of a “small lady” (their words) suspended in the air, at the top of an oak tree. The lady told them she would return to that exact place every month for a six-month period, until the last visit, which took place on October 13, 1917. Those appearances were allegedly witnessed by several people that used to follow the children to the original location.

The “lady” alledgely appeared, as promised. As the word started spreading out regarding the monthly apparitions in Fatima, people from all over Portugal showed up in growing numbers. The final and sixth appearance of the “Virgin Mary” on October 13th, 1917, had an estimated crowd of about 60,000 people. From that day on, that event was known as the “Miracle of the Sun.” 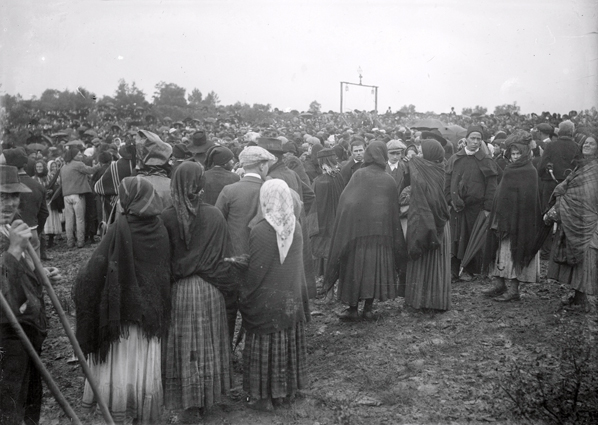 13th October 1917, Is that 2 orbs at the top left? Probably just a reflection on the lens, but very similar to other UFO sightings.

On that day, about 60,000 pilgrims flock to the oak tree location to witness the “miracle”. People from all over Portugal, as well as reporters from several news publications such as “O Século” were present to report the event. Different opinions were gathered with people witnessing nothing at all to reporting having seen a “dancing” sun and a bee’s like buzzing sound. 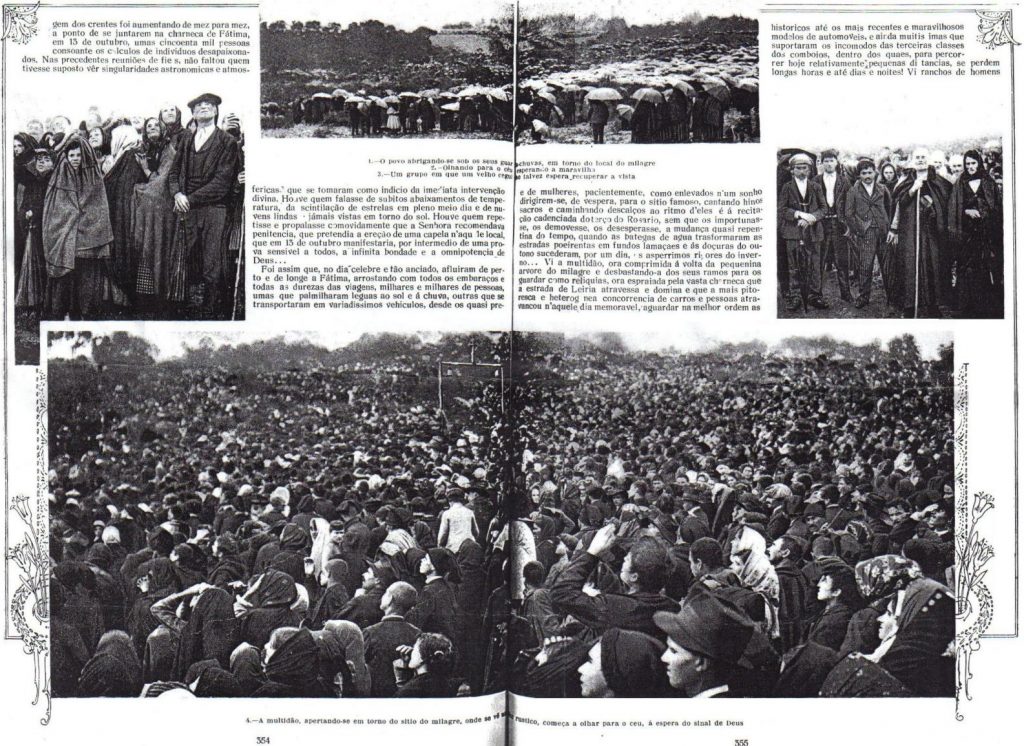 The children were the only ones able to telepathically “hear” the apparition, which is similar to other reported contactee cases where communication with aliens is usually also telepathic. All the other people just witnessed some of the strange events that took place there. Those events include a bee’s buzzing sound, every time the apparition spoke, strange disappearing clouds giving place to a dancing sun ( a possible reference to a UFO sighting), weird storm phenomena or the sudden stop of the falling rain at the time of the apparition. 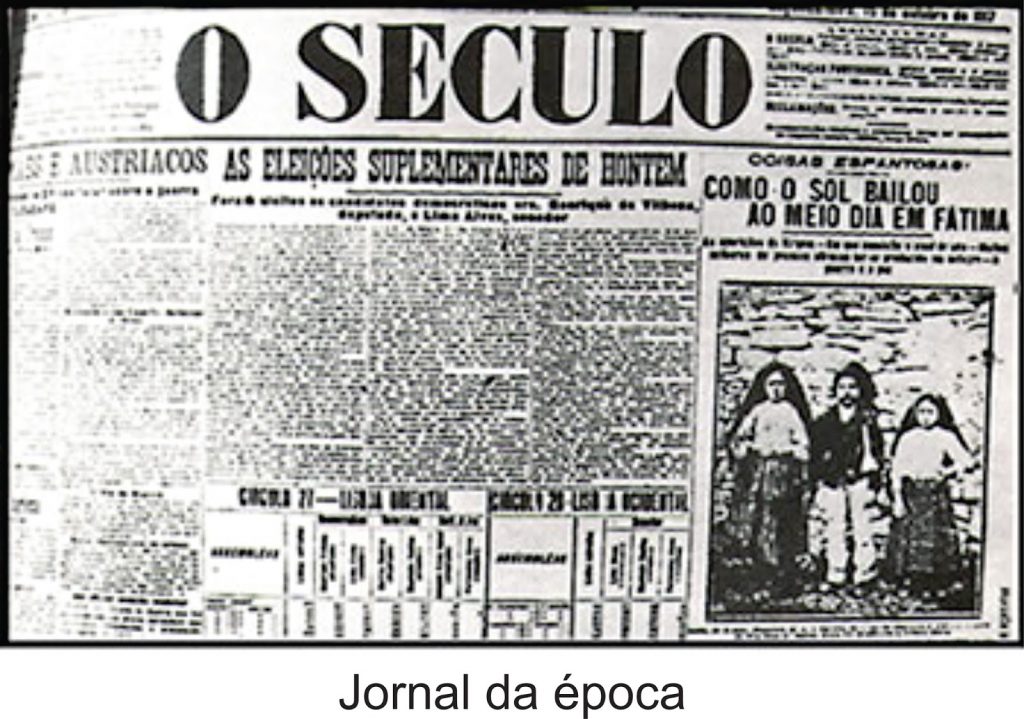 Many of the witnesses mention the fact that, out of nowhere, people close dried up instantly (it was raining on that day), which is interesting in the sense that many contactee cases report losing track of time. Others witnessed seeing what got referred to as “angel hair” that started falling from the sky. This phenomenon is also recurring to other UFO sightings ( //www.dailygrail.com/Essays/2004/10/Tripped-Angel-Hair-Part-I). 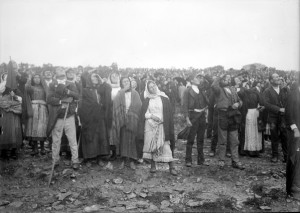 Dr. Manuel Formigão who was assigned by the Vatican to document everything Lucia and the other 2 seers were saying about the apparition, has written notes in which the apparition never said who she was, despite the mainstream knowledge regarding this issue that the apparition was the virgin Mary.
When Lucia asked the Lady where she’s from, the ghost merely pointed her finger up to the sky. Lucia, one of the children, interpreted that as the Lady indicating, they came from heaven, a holy heaven, instead of merely pointing out towards the stars.

Let’s not forget that the Portugal of 1917 wasn’t modern society it is today. Back then, people had reduced or none education, was heavily rural and religious, making more likely that their interpretation of the event went to a religious sense, instead of any other possible interpretations.
It is all the information Lucia ever got from the apparition, regarding who she was and where she was from.

This engaging story sure deserves a closer look over the discrepancies of the documented facts. The religious version of events regarding the Fatima incident seems to point out, accordingly to many well-documented studies, to a UFO cover-up scenario. And since proof of UFO facts is most times sketchy, to say the least, I guess it’s up to the reader to investigate and judge the facts.

Facts Pointing Out to UFO Sighting 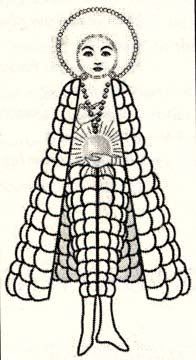 Sketch approximation of the drawing that Lucia made of the apparition.

Some excerpts from the interviews that are included in the book HEAVENLY LIGHTS: The Apparitions of Fatima and the UFO Phenomenon (Link Bellow)

September 27/1917, Interview of Lucia:
Formigâo: “Did she smile sometimes, or was she sad?”
Lucia: “She neither smiled nor was she sad; she was always serious.”

September 27/1917, Interview of Lucia:
Formigâo: “Why do you often lower your eyes, instead of keeping them on the Lady?”
Lucia: “Because she sometimes blinds me.”

September 27/1917, Interview of Lucia:
Formiagâo: “Did she tell you and your cousins to say certain prayers?”
Lucia: “She told us to say the Rosary in honor of Our Lady of the Rosary, to obtain the peace of the world.” (Might be influenced by heavily religious mother, father, and friends of the children)
Formigâo: “On the 13th of October will our Lady come alone?”
Lucia: “St. Joseph and the Holy Child will come, and a little time afterward the world will have peace.”
Formigâo: “Did our Lady reveal anything more?”
Lucia: “She said that, on the 13th of October, she would perform a miracle so that the people can believe that she appeared.”
Formigâo: “Did she teach you any prayer?”
Lucia: “Yes, and she wants us to recite it after each mystery of the Rosary.”
F: “Do you know this prayer by heart?”
Lucia: “Yes.”
F: “Say it.”
Lucia: “O my Jesus, forgive us and deliver us from the fire of hell. Take all souls to heaven, especially those who are most in need.”

October 13, 1917 (about 6 hours after the miracle of the Sun) Interview of Lucia:
Formigâo: “What did the Lady say this last time?”
Lucia: “She said: ‘I have come here to tell you that people must not offend our Lord anymore. Because He is very much offended and that if the people amend their lives the war (1st WW) will end, and if not the world will end.’

Below is a summary of the Fatima apparition descriptions from Page 18 of the 2005 book entitled: “Heavenly Lights, The Apparitions of Fatima and the UFO Phenomenon” by the Portuguese historians Dr. Joaquim Fernandes, Ph.D. and Dr. Fina D’Armada (RIP – Died March 2014). (Link Bellow)

There aren’t any photographs of the actual Miracle of the Sun with all the events that allegedly happened, not just on that day but on all the other 6 previous months. Even though there were many reporters there that took some pictures of the “Miracle of the sun” day, but not of the apparition or of the “dancing sun” itself. Some authors claim that the photographs of those events might be found deep within the bosom of the Vatican Library.

Some state the handwriting of Lucy’s in the 3rd secret is fake. According to Father Alonso and Cardinal Ottaviani, //www.tldm.org/news/lucys_writing.htm (The Secret of Fatima: Fact and Legend, Fr. Joaquin Alonso, p. 65) “She has written on one sheet of paper what Our Lady told her to tell the Holy Father.” But in the alleged original document it is in fact written on both sides. (//www.tldm.org/news/critique1b-word.htm)

Jim Marr’s last paragraphs on the Foreword of the book “Celestial Secrets: The Hidden History of the Fatima Incident” said: “This book, however, may change all that. In Celestial Secrets, the secret history of Fatima becomes a lot less hidden. For the true believer and the skeptic alike — Celestial Secrets provides the best researched, the most detailed, and the most comprehensive look at the Fatima apparitions ever published. The reader will learn how the Society of Jesus suppressed the facts of Fatima; how the Jesuits portrayed the “pretty little lady” described by the young shepherds as the Virgin Mary; and how they manipulated the testimony of direct participants to support their suppositions. Fatima, it seems, was an early episode in the cosmic Watergate.”

Hopefully, more facts regarding the Fatima incident may arise as it seems to raise more questions than answers. Some speculate the real third Fatima secret may be answers regarding what this phenomenon really was, while others say the secrets were made up to help justify Lucia’s vow of silence to keep the secrecy of the whole matter.
For now, one can only hope time won’t keep us waiting for long from knowing what happened in the Fatima incident. We may even never know what happened. Only time will tell.