Meaning of The Number 55

The number 55 is about a break away from a more static to a more organic or intuitive structure resulted from knowledge. 55 resonates with the seed of innovation, the freedom of new paths or the rebirth of liberty through new perspectives. 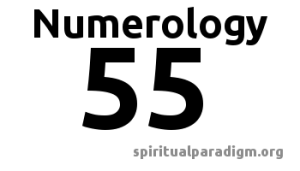 Numerology meaning of the number 55

On the negative side, the number fifty-five resonates with stubbornness, misuse of the power to create or destroy abilities or talents, scattered efforts, fear of boredom, focus on unrewarding pursuits.

Fifty-five is also a higher state of 1 and knowing its inner workings might come in handy.

On the positive side, the energy attributes of the number one words resonates with organization, achievement, strength, self-reliance, tenacity, authority, assertiveness, ambition, physical paradigm, will, focused consciousness and the ability to use resources effectively.
Number 1 encourages stepping out of the comfort zone, creating its reality, from thought to action and seeking new paths.

On the negative side, the number one resonates with narrow-mindedness, intolerance, lacking in emotion, too much aggression, arrogance, dominance, inconsiderate and stubbornness.