The existence of the 6th sense has long been a matter of discussion. Some skeptics keep seeing it in a pure Newtonian perspective, while new scientific studies seem to be willing to re-write what the sixth sense is.

A few days ago I came up to a quora Q&A that got my attention. The question was “Why do humans have a sixth sense for knowing when someone is staring at them?”. 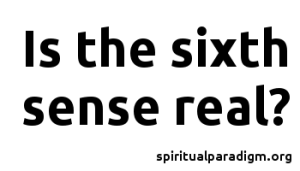 Is the sixth sense real?

The skeptics (what I believe to be the majority) on this matter were the first to respond with an uncanny certainty regarding what their conscious mind to make them believe “reality” is. The very first answer stated:

“We don’t have a sixth sense, we use our regular senses and pick up clues from our environment so subtly we aren’t certain what has alerted us. This is very much like a feeding deer suddenly realizing a predator may be stalking them.”

The next answer was similarly sure, thought a little more succinct:

“We don’t (referring to humans having sixth-sense). It is a myth”.

One user came to some good reasoning, but in my humble opinion could be missing the point.

“Our peripheral vision is optimized to detect motion, direction of motion and point lights like the glint of an eye (right for seeing predators in the dark). As a party enters our visual cone, the brain makes motion its subconscious priority.”

“We don’t(have sixth sense), in the magical/metaphysical sense. We do have peripheral vision, stereo hearing, and plenty of background perceptual stuff rigged up around them.”

But not all users classified sixth sense as “magical”. One user went in an interesting direction stating:

“The idea that a sixth sense of being watched would put snipers out of work has been addressed by a sniper himself.
Howard Wasdin, a SEAL team six snipers did acknowledge this phenomenon in his book. SEAL Team Six: Memoirs of an Elite Navy SEAL Sniper”

But as soon as I thought the conversation was going somewhere interesting, soon came the next…

“If we did, snipers would be unemployed.
That said, if someone in your peripheral vision is looking at you, you’ll probably register it.”

, and there we went into a pure left brain mentality again.

The penultimate Quora user went in the same direction my thinking was heading in the first place.
One century-old Shaolin Martial Arts technique mention the fact that one should never look directly at an opponent when the objective is not to be seen.

The same goes for military special forces, where similar techniques get used.

Maybe the sixth-sense isn’t such a “magical” thing as some people believe it is, but something as real as you and me.
So what’s going on here?

My Humble Take on This

I’ll start by quoting Einstein, “The field is the sole governing agency of the particle”.
My understanding is that two single facts are important clues to this phenomena. According to the Entanglement Theory. Particles can “sense” the environment. Also, can the cells in our body feel their surroundings and react accordingly, and they don’t have eyes like we do. In Quantum Entanglement, the behavior of a particle can be determined by the behavior of another (even if far apart from each other).
The same way, so do humans might have more than the traditional known five senses to make sense of the environment around them.

This is all great, but what is science saying about the sixth sense?

Scientific Studies On the Sixth Sense

“The five senses of sight, hearing, smell, taste, and touch, enumerated by Aristotle, were added in the early nineteenth century by the muscle sense, multiple dimensions of touch, and a movement sense. Aristotle explicitly excluded a sixth sense. The division of touch into several sensations was entertained and rejected by Aristotle, but it was given anatomical, physiological and psychophysical support in the late-nineteenth century. A separate muscle sense was proposed in the late-eighteenth century, with experimental evidence to support it. However, before these developments, behavioral evidence of the vestibule (movement) sense was available from studies of vertigo, although it was not integrated with the anatomy and physiology of the labyrinth until the nineteenth century. The history of the search for a sixth sense is outlined, and the evidence adduced to support the divisions is assessed. The behavioral evidence has been accorded less weight than that from anatomy and physiology.”

“Predicting the near future is important for survival and plays a central role in theories of perception, language processing, and learning. Prediction failures may be particularly important for initiating the updating of perceptual and memory systems and, thus, for the subjective experience of events. Here, we asked observers to make predictions about what would happen 5 sec later in a movie of everyday activity. At points of unpredictability, midbrain and striatal regions associated with the phased release of the neurotransmitter dopamine transiently increased in activity. This activity could provide a global updating signal, using other brain systems that a significant new event has begun.”

Scientists are beginning to understand better how the brain and perception are predicting the future.
Researchers at Washington University focused on the mid-brain dopamine system (MDS) that provides signals to the rest of the brain when unexpected events occur.
Using functional MRI, the researchers found that this system predicts error when viewers are forced to choose what will happen next in a video of an everyday event.
They found that 80% to 90% of the audience’s predictions were correct, depending on when the footage got stopped.

This means that when we watch everyday activity unfold around us, our subconscious makes predictions about what will happen a few seconds out. And most of the time, our predictions are right.

“This article examines the symbolic life of the 1986 Chernobyl nuclear disaster. I argue that Chernobyl symbols serve as a set of resources: they produce memory, and they are the grounds for making a new society. My analyses are based on representations of Chernobyl in academic and popular discourse, literature, and museums. Through discussions of embodiment and collective memory, I argue that Chernobyl has produced a sort of sixth sense or “awareness-plus” among those who share the experience of the disaster.”