An idea is a form of energy waiting to become mass.
An idea knows no locality or time, and it exists in a nonphysical world.

An idea can be measured scientifically. With an Electroencephalography (EEG), one can record the electrical activity along the human scalp, and measure the voltage fluctuations resulting from ionic current flows within the neurons of the brain.

Brains are receivers and transmitters of ideas (thoughts). Ideas are transmitted and picked up by the subconscious mind, which acts as a vehicle of communication. 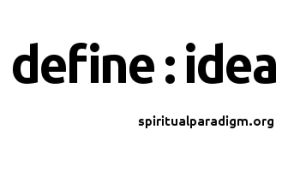 An idea is a separate entity from man. Ideas exist in the non-physical world and are transformed and renewed as they go about all the “minds” that “work” on that idea.

Ideas have only two possible states

That might help explain why an idea is a separate identity from man. It can operate independently from man, and it can grow and change. The man is merely a vessel for them, and man’s power is to create, use and transform ideas.

Where are ideas coming from and going to?

Ideas are not mine or yours, and they belong to the non-physical world, and everyone can have access to them. What may change is the personal perception of those ideas (interpretation).

When someone creates a new idea, that idea stops having owner the moment it got thought, because, in essence, that idea already exists on a higher fractal level. So ideas don’t have ownership but can be transformed or enhanced by anyone.

So an idea is everybody’s territory. The sensed feeling some might have about owning an idea might be nothing more than the ego miss interpretation of the concept possession. The fact may be that an idea in its pure form is never really anyone’s property.

Can an idea change the world?

Even past many generations, an idea can still change the world.
The greatest power regarding ideas is that they cannot get silenced, cannot be touched, cannot bleed, as they simply aren’t in the physical world.
It is the function of life to operate the ideas in the physical world. Both, ideas and life are ineffective alone, but they can work very well together, as completely separated entities.
We are the vehicles of ideas, not their owners.